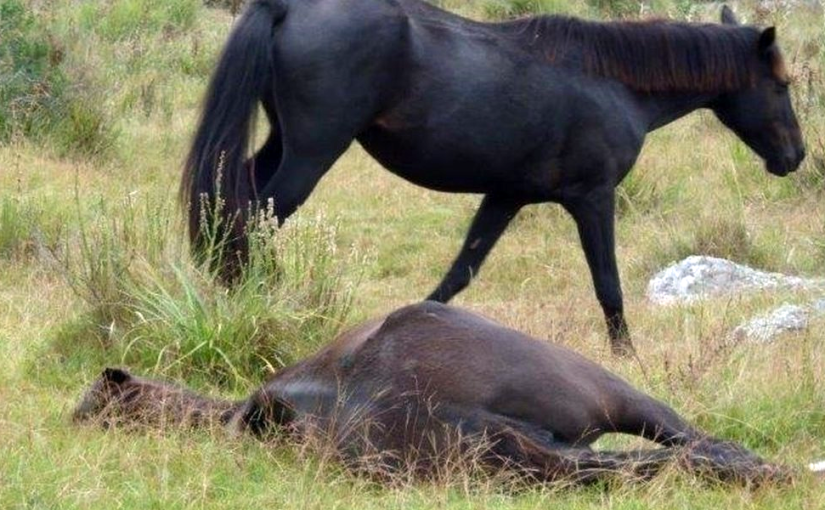 A close look at the Serum & PMSG Industry in the United States, Argentina and Uruguay.

A new undercover investigation carried out by Animals Angels, Inc. (AA) and their European partner, Tierschutzbund Zuerich/Animal Welfare Foundation (TSB/AWF), reveals yet another way humans have found to exploit horses; this time to garner multi-million dollar profits for none other than pharmaceutical companies.

Shocking evidence has uncovered the existence of “blood farms” in the U.S. as well as in countries like Argentina and Uruguay.

Blood farms are a high dollar enterprise where “donor herds” of horses are kept for blood extraction purposes only. The blood drawn from the horses kept on these farms is used by companies throughout the U.S. and abroad for a variety of applications such as biological research, diagnostic manufacturing and veterinary drugs.

The blood taken from pregnant mares is especially in high demand, because it contains a precious hormone used to produce a veterinary drug needed by the pork industry. . . . PMSG.

PMSG, or Pregnant Mare Serum Gonadotropin, is the main ingredient of several products that will artificially induce heat in weaned sows to achieve a faster and more regulated reproduction.

AA determined that several U.S. companies are involved in the trade, some even maintaining their own herds for collection purposes. Others purchase the finished product from their international affiliates, who in turn obtained the PMSG straight from sources in Argentina or Uruguay.

While a relatively unknown industry, the horse blood trade is a huge business. For instance, Syntex Uruguay SA, one of the largest producers of PMSG, exported $8 million dollars’ worth of the product to the EU in 2014 alone.

AA and their EU partner TSB/AWF conducted investigations in the US, Argentina, and Uruguay to find out just what the horses are forced to endure in this mostly unregulated and undocumented business.

Inspections by governmental agencies are virtually nonexistent. Supervision? Enforcement? Oversight? There is none.

Remarkably, there are no specific laws or regulations in the U.S., Argentina, or Uruguay to protect horses in this unique environment. There is absolutely nothing in place to regulate just how much blood is taken or how often. While guidelines exist for blood farms to follow, there are no consequences when they fail to comply, making the guidelines useless.

In between extraction cycles, mares are kept in Eucalyptus forests and vast pastures to recover. Workers do not check on them on a regular basis, so injuries, illness, and miscarriages often go unnoticed. Investigators found that horses often die without assistance.

A horse should have just 15% – 20% of his total blood volume taken during a 4 week period. However, no regulations are in place to ensure that not more blood is taken.

Former workers report that it is common practice for 10-12 liters to be taken in a single extraction which can lead to hypovolemic shock and even death. Undercover footage from Argentina seems to confirm this, since a mare was seen collapsing and struggling right after blood extraction.

Undercover footage also shows violent handling and abuse. Horses are beaten with wooden boards and sticks, and tortured by excessive electric prod use.

Public records indicate that U.S. companies, such as Intervet Inc. d/b/a/ Merck Animal Health, sell products (P.G. 600) containing PMSG obtained from horses in Uruguay. Others, like Sigma Aldrich admit to the fact that their product uses PMSG obtained from herds within the U.S.

When it comes to regular horse serum, a company called Central Biomedia located in Missouri is of particular concern.

The donor herd at this location has approximately 200 horses made up of Draft geldings. Although the company’s website espouses the conditions under which the horses live, Animals’ Angels investigators witnessed different circumstances indeed. Thin Draft horses with ribs showing and horses struggling to walk through muddy pens as they sank into the muck well over their ankles weren’t exactly described in detail on the website. In addition it is of great concern that these horses, like at so many other blood farms, might end up at slaughter when their usefulness has ended.

But worse yet, as with other blood farms, these horses are “invisible” as is the facility. They operate with seeming impunity. USDA/APHIS does not carry out welfare inspections or in fact, any type of inspection at these blood farms, since the Animal Welfare Act does not apply. This is obviously a serious gap in the enforcement aspect that needs to be corrected immediately to provide the protection these animals deserve.

AA strongly urges the U.S. Congress to amend the Animal Welfare Act to include stringent regulations for the humane handling and care, as well as welfare inspections, for the horses used on blood farms in the United States. Additionally, AA calls upon the industry itself to end all PMSG production and replace it with available, synthetic solutions.

Until then, AA and their international coalition partner, TSB/AWF, are calling upon the EU Commission and the U.S. Government to stop the import of PMSG from Uruguay and Argentina.

To watch the video footage from the investigation, please go here. (Warning: Graphic)