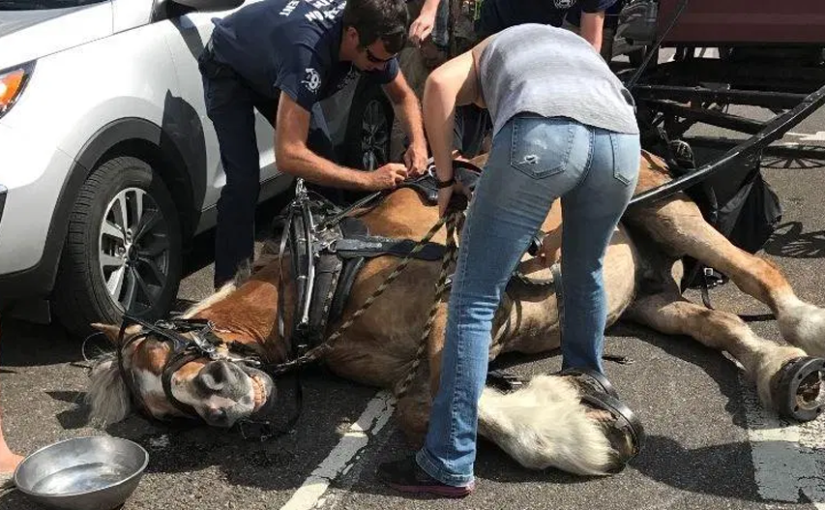 BIG JOHN.  Featured Image (above):  A Charleston Carriage Works horse named Big John fell near Meeting and Hasell streets in downtown Charleston, April 2017. The animal’s owners said the horse tripped and lay still until the tack was removed, as it was trained to do, and then got back up and was fine. Charleston Carriage Horse Advocates claimed the animal collapsed from exhaustion.

The following is a random sampling of the brutality of the carriage horse industry caught on camera.

A horse made to pull tourists in a carriage in temperatures of more than 30°C [86ºF] was photographed after collapsing with exhaustion. Heartbreaking pictures showed the brown horse struggled to carry three holidaymakers through the streets of Manila in the Philippines, on April 2, 2019.

Witnesses came to throw water on the visibly underweight animal after the horse’s legs buckled and she fell in the middle of the road. Source.

A man who was riding with his family in a horse-drawn carriage that ran wild on the streets of Oconomowoc, Wisconsin Saturday is speaking out about what he calls the scariest thing he’s ever been through. The two horses crashed into two cars at an intersection. “It turned into madness,” he stated. 15 people were treated for minor injuries suffered in the December 2017 smash up.

On 17 August 2018, at approximately 7:45 pm, a witness contacted Victoria Horse Alliance with a report of a horse carriage accident at the cruise ship terminal at Ogden Point. One witness who took pictures of the incident immediately after it happened described what happened: “The horses actually were partially on top of the car.” This is at least the second incident in the last three months.

“The carriage stopped at the top of the hill. When they went to go, they lost traction and the one on the left (from behind) fell and took the other with him. At that point the large T shaft was between them and intertwined with horses legs and had them pinned down. When removing the T shaft one point of the T was about to jab into left horses belly as the horse jolted but the men were able to keep the horse down and was able to maneuver it from the legs and safely remove it from between them.” Narrative continues after the image.

“Horses working in the carriage industry slipping and risking injury in Victoria has been documented previously. During the free horse-drawn trolley tours sponsored by the Downtown Victoria Business Association, animal advocates from the Victoria Horse Alliance witnessed trolleys regularly being overloaded and the horses slipping on the pavement multiple times. Several bylaw infractions were filed with the city of Victoria bylaw department. Even after the complaints were filed, no change was seen in the behaviour of the carriage operators.” Published by Victoria Animal News. Source.

The New York Post reported, “Disturbing images show a seemingly-exhausted carriage horse (pictured above) lying limp on his side after suddenly collapsing in Central Park — and now an animal rights group is demanding an investigation.”

“Witnesses saw the horse breathing heavily before he collapsed on the ground near Tavern on the Green around 10 a.m. last Tuesday, said a rep for the anti-carriage group NYCLASS.”

NYCLASS demanded an immediate investigation. In the meantime, “Carriage driver Chris Emanus put the horse, named Max, back to work on Monday, insisting he’d been cleared by a vet. Emanus claimed the equine had simply tripped because he was wearing horseshoes for the time in eight months after returning to the city from a farm.” Source.

Chris the carriage horse disappeared from the City following a spooking accident in midtown Manhattan. His driver is quoted as saying Chris was sent to the New Holland, Pa. slaughter auction. Chris had broken his leg.

Animal rights advocates are up in arms after a horse was hit by a bus in Manila. According to witnesses, a Green Star passenger bus with body number 2205 and plate number ACD 4182 hit the horse which was drawing a calesa along Magsaysay Boulevard. Instead of stopping, the bus sped on leaving the injured horse slumped beside a passenger jeepney.

HOW AND WHERE THEY LIVE

OUTMODED PRACTICE MUST BE BANNED

Major cities such as London, Paris and Toronto have all banned horse drawn carriages. It is time for other areas where these industries currently exist (such as New York City) to move into the 21st century and take seriously its moral and ethical responsibility to these sentient beings while ensuring the safety of its citizens. See Cities That Have Banned the Carriage Horse Industry »

Surely as a civilized society, we should and must do nothing less than getting these horses off the streets and out of danger.

• Read posts on carriage horses on our blog, Tuesday’s Horse »